What is a Heat Pipe?

Heat pipes might seem like a new concept, but you are probably using them every day and don't even know it.  Laptop computers often using small heat pipes to conduct heat away from the CPU, and air-conditioning system commonly use heat pipes for heat conduction.  In the Apricus AP and ETC solar collectors they are used to transfer heat from within the evacuated tube up to the header pipe that is housed in the insulated manifold box.

The Apricus heat pipe design comprises a long hollow copper pipe with a larger diameter bulb at one end.  A small amount of high purity water is added into the heat pipe and then heated to high temperatures to evacuate any air from within the space.  The result is a vacuum, similar to the space between the glass walls of the evacuated tube.

In a heat pipe, the vacuum is not used for insulation, but rather to alter the behaviour of the liquid inside.  At sea level water boils at 100oC / 212oF, but if you climb to the top of a mountain the boiling temperature will be lower. This is due to the difference in air pressure, and a vacuum is a state of very low pressure.  Based on this principle of water boiling at a lower temperature with decreased air pressure, by evacuating the heat pipe we can achieve the same result.

The heat pipes used in AP solar collectors have a boiling point of only around 30oC (86oF), so when the heat pipe is heated above this temperature the water begins to vaporize (turn to steam).  This vapour rapidly rises to the top of the heat pipe and carries with it large amounts of heat.  As the heat is off-loaded to the to the cooler liquid circulating through the solar collector header pipe at the bulb (top), the vapour condenses to form a liquid (water) and returns to the bottom of the heat pipe to once again repeat the cycle.

During the heat pipe operation cycle the flow of condensed liquid (water) to the bottom relies on gravity and for this reason heat pipes of this design do not work when horizontal and have reduced output when vertical.  Apricus recommends an installation angle range of 20-80o to ensure optimal solar collector performance.

At room temperature the water in the heat pipe forms a small ball shape. When the heat pipe is shaken, the ball of water can be heard rattling inside. Although it is just water, it sounds like a piece of hard metal. 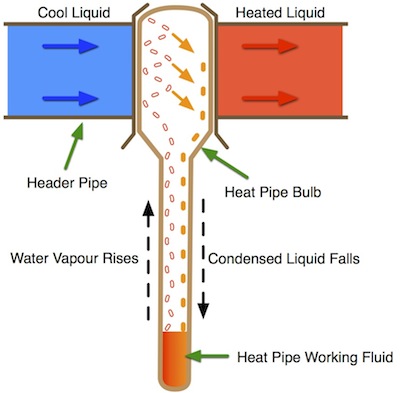 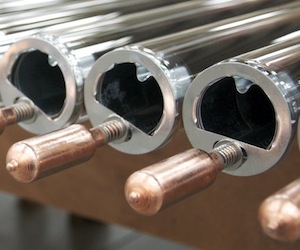 Material quality and cleaning are extremely important to the creation of a good quality heat pipe. The purity of the copper itself must also be very high, containing only trace amounts of oxygen and other impurities.  If the copper contains too many impurities, they will leach out into the vacuum over time forming a pocket of air in the top of the heat pipe. This has the effect of moving the heat pipe's hottest point downward away from the bulb where the heat transfer is required to occur.

Apricus heat pipes are freeze protected with a patented design that has been independently tested by the TUV testing laboratory as part of European testing standards for solar collectors.

Apricus produces its own heat pipes in an ISO9001:2008 certified facility, carefully controlling and quality checking each aspect of the production process.