It's official: 2012 was the warmest year on record in the lower 48 states, as the country experienced blistering spring and summer heat, tinderbox fire weather conditions amid a widespread drought, and one of the worst storms to ever strike the Mid-Atlantic and Northeast.

According to the National Oceanic and Atmospheric Administration (NOAA), 2012 had an average temperature of 55.3°F, which eclipsed 1998, the previous record holder, by 1°F. That was just off Climate Central’s calculation in mid-December, which projected an expected value of 55.34°F, based on historical data.

The 1°F difference from 1998 is an unusually large margin, considering that annual temperature records are typically broken by just tenths of a degree Fahrenheit. In fact, the entire range between the coldest year on record, which occurred in 1917, and the previous record warm year of 1998 was just 4.2°F.

The year consisted of the fourth-warmest winter, the warmest spring, second-warmest summer, and a warmer-than-average fall. With an average temperature that was 3.6°F above average, July became the hottest month ever recorded in the contiguous U.S. The average springtime temperature in the lower 48 was so far above the 1901-2000 average — 5.2°F, to be exact — that the country set a record for the largest temperature departure for any season on record.

"Climate change has had a role in this [record],” said Jake Crouch, a climate scientist at NOAA's National Climatic Data Center in Asheville, N.C. He said it isn't clear yet exactly how much of the temperature record was due to climate change compared to natural variability, but that it's unlikely such a record would have occurred without the long-term warming trend caused in large part by emissions of greenhouse gases.

During the summer, nearly 100 million people experienced 10 or more days with temperatures greater than 100°F, which is about one-third of the nation's population, NOAA reported. 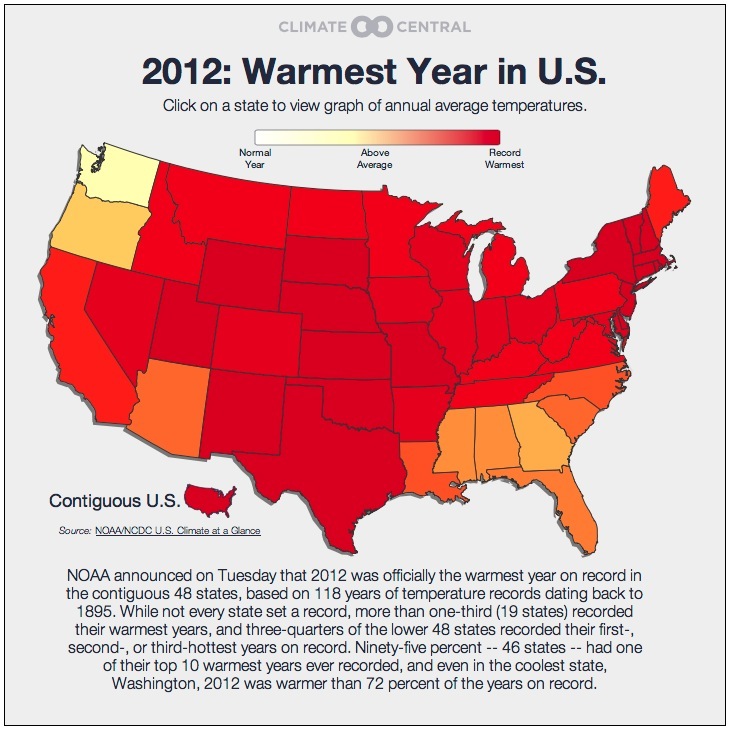 Click here to view interactive version of the US map